Our industry-standard approach to cycle mapping

Our cycle maps were pioneered by members of the campaign, with the Cheltenham & Bishop’s Cleeve Cycle Map being the first of its kind to be published in the UK. Similar maps have since been published for Gloucester, Tewkesbury, Cirencester and Kettering, and we continue to offer consultancy to support other towns and cities to produce comprehensive tools for people to plan journeys.

Instead of showing only specific cycle routes and other facilities, the map categorises the entire highway network according to the degree of skill and experience needed for cycling. This classification is linked to levels of cycling competence prescribed by the National Standard for Cycle Training.

The map is based on the following principles:

All roads (other than where cycling is legally prohibited) are cycle routes, but the amount of skill needed for using them varies according to traffic volume and speed and the complexity of road design. Whilst inexperienced cyclists will not be competent to use more difficult roads, almost all roads are capable of being used safely by cyclists who can attain Level III in the National Standard for Cycle Training.

The map should have the widest audience and provide information useful to cyclists of all abilities. However, not all of the information will be relevant to all cyclists. By providing ‘higher level’ information, less able cyclists may be inspired to extend their horizons by becoming more skilled.

Whilst designated cycle routes and other facilities are clearly shown, they should not dominate the map. Facilities of low standard, particularly where there are safety concerns, should generally be omitted.

The map as a whole should provide a ‘do-it-yourself’ tool to enable any individual, irrespective of their ability, to work out the route that is best for them between any two places. No network of designated cycle routes can ever provide such a comprehensive asset for all cyclists.

A base map showing cycle routes for all abilities

The map uses a digital base map with all roads shaded according to the experience required to use them. There are five classifications of road. Whilst all classification is subjective, the following general criteria are applicable. Colours are applied incrementally along roads (not to roads as a whole), as conditions change.

The standard also provides for the depiction of steep hills by an arrow pointing downhill (similar to that used by Ordnance Survey).

Designated cycle facilities are shown on the map as an overlay in such a way that the base information is not obscured. Only facilities legally available for cycling are shown. The following types of facilities are depicted: 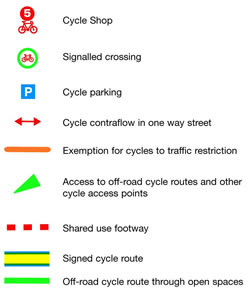 Consultancy and help to create your own cycle map

The experts that developed these maps continue to be active members of the cycling campaign, and we are able to offer cost effective consultancy to help you develop a cycling map for your area. Contact us to arrange an initial discussion on how we can support your needs.

This website uses cookies to improve your experience while you navigate through the website. Out of these, the cookies that are categorized as necessary are stored on your browser as they are essential for the working of basic functionalities of the website. We also use third-party cookies that help us analyze and understand how you use this website. These cookies will be stored in your browser only with your consent. You also have the option to opt-out of these cookies. But opting out of some of these cookies may affect your browsing experience. You can view our full privacy policy here.
Necessary Always Enabled
Necessary cookies are absolutely essential for the website to function properly. These cookies ensure basic functionalities and security features of the website, anonymously.
Functional
Functional cookies help to perform certain functionalities like sharing the content of the website on social media platforms, collect feedbacks, and other third-party features.
Performance
Performance cookies are used to understand and analyze the key performance indexes of the website which helps in delivering a better user experience for the visitors.
Analytics
Analytical cookies are used to understand how visitors interact with the website. These cookies help provide information on metrics the number of visitors, bounce rate, traffic source, etc.
Advertisement
Advertisement cookies are used to provide visitors with relevant ads and marketing campaigns. These cookies track visitors across websites and collect information to provide customized ads.
Others
Other uncategorized cookies are those that are being analyzed and have not been classified into a category as yet.
SAVE & ACCEPT
Powered by